The 5 sauces every chef needs to know 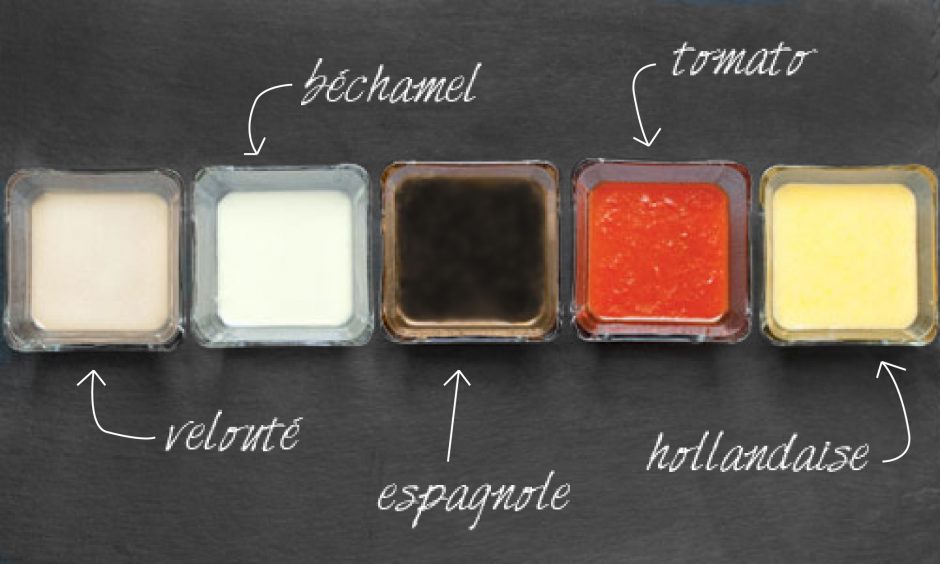 The 5 sauces every chef needs to know

Here’s what you need to know about the building blocks of sauces:

Beyond flavour, the most important element of any sauce is its ability to smother and cling to whatever it gets drizzled, dolloped, or poured on. That means making the sauce thick and stable, which is accomplished with three techniques: a roux, an emulsifier, and a reduction (liquid that’s slowly cooked down until thick).

Four out of the five mother sauces start with a roux. Roux is a fancy name for flour mixed with fat. Equal parts butter and flour get cooked over medium heat, then a liquid gets added. This mixture then boils, thickens (reduces), and becomes the base of your sauce. Just note, if you’re making a white sauce—like Béchamel or Velouté—do not brown the butter, as it will darken the finished product. The last mother sauce is a product of emulsification, which I’ll explain below.

Here are the basic formulas of the five mother sauces:

Tomato: Roux + Tomatoes (or, go the Italian route by skipping the roux and simply reducing tomatoes over medium-low heat until thick)

If you’ve eaten homemade macaroni and cheese, a classic croque madame, or lasagna, chances are you’ve experienced the rich creaminess of Béchamel. It can be made in its most basic form by just combining roux and cream, or it can be mixed with other ingredients to create new sauces: Mornay is made by adding Gruyère or Parmesan, and mustard sauce is made by adding—you guessed it—mustard.

Like good old Béchamel, Velouté begins with a white roux, but then it gets mixed with white stock made from fish, chicken, or veal. Technically not a finished sauce, it’s used as a flavorful starting point for gravies, mushroom sauces (hello chicken pot pie), and shrimp sauce (hello shrimp bisque).

Although some think blond roux have more fun, Espagnole proves that dark roux know how to party, too. Also known as brown sauce, Espagnole begins with a mirepoix (carrots, celery, and onions), beef stock, and deglazed brown bits (fond) from beef bones. From there, tomato paste and spices may be added.

To make a demi-glace, a rich French brown sauce, combine the Espagnole with more beef stock; to create Bordelaise, a red wine sauce that pairs well with steak and mushrooms, mix the demi-glace with red wine and herbs. Serve this with filet mignon for an excellent dinner.

Probably the first mother sauce you ever tasted (over a heaping bowl of spaghetti), tomato sauce is often a mixture of just onions, garlic, and tomatoes. Although some traditionalists may start with a roux, most tomato sauces merely rely on a tomato reduction to build flavor and create thickness.

Think of Hollandaise as a fancy mayonnaise that uses clarified butter in place of oil and gets drizzled over asparagus and eggs without judgment. Instead of using a roux or a reduction, Hollandaise uses the method of emulsification: the act of using a binding agent (in this case, an egg yolk) to force two ingredients that don’t mix well together (here, butter and lemon juice) to like each other immensely. Hollandaise takes patience, as you’ll need to temper the mixture so that the eggs do not curdle. The sauce can break easily, but you can patch things back together by adding a little heavy cream and whisking until the sauce returns to its smooth state; or use Amanda’s trick for fixing broken aioli—a close relative of Hollandaise sauce—by using the broken emulsification to start your next batch. Sound like a lot of hard work? This Fried Green Tomato Benedict makes it all worth the trouble.

When mixed with unsweetened whipped cream, Hollandaise suddenly becomes airy Mousseline that can be poured over fish or vegetables.