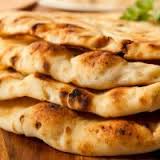 Comments Off on Best ever Naan Bread recipe

You will love this recipe, and you can make and freeze them, although always better freshly made!
The recipe is as follows;

500 grams maida flour (use a hard flour like the Italian 00 doppio zero or any other pasta flour or bread flour works)
250ml milk
2 teaspoons dried yeast (or 15 grams of fresh)
1/2 teaspoon baking powder
large pinch of salt
1 egg, beaten
2 tablespoons of oil or ghee (plus extra to brush on the cooked bread if liked)
200ml of thick, natural yoghurt
Sift the flour, baking powder and salt and make a well in the centre. Warm the milk to blood temperature and mix half of it with the yeast and let it bubble and proof. Beat the egg with the oil and yoghurt. Dump the egg/yoghurt mix and the milk/yeast mix into the flour and stir until it forms a dough. If the dough is dry, add more milk and knead until it is silky and smooth (about 5 minutes). Put it into an oiled bowl, cover it with a damp cloth and leave it in a warm place until it doubles in size. The original recipe said that this would take several hours but – this being Australia – mine was ready in about an hour (we are having a warm day, so your mileage may vary). When it’s ready, punch it down, give it a quick knead and divvy it up into 10 portions.

Heat a frying pan over a medium/hot heat. Roll out your dough with plenty of flour until it is very thin (almost like a pancake) and put it directly into the warm, unoiled frying pan. Cover and cook for a few minutes at a low heat. Check to see that it isn’t burning. The dough should have bubbles appearing in the top and the bottom should have deep golden spots across it. Slide it around the pan so it cooks evenly. When ready, flip it over and let the top cook until it, too, has deep golden spots. You should aim for a dark gold to deep toast colour. Try not to let it get black. Keeping a lid on the pan will make the dough puff a little more but don’t stress over it – this is a flatbread after all.

When it’s done, flip it out and start again. If you want, brush the naan with ghee or oil.

TOP TIP: For garlic naan, flavour the brushing oil rather than the dough – the flavour is better and you won’t get the bitter flavour of burned garlic when you cook.